January 2, 2019 – April Joy Farm is located near Ridgefield, Washington on 24 acres above the Columbia River Slough. The farm was purchased on contract from Annie Peterson in 2003. Coming “home” to this farm was the realization of a dream for April Thatcher née Jones, who spent many happy childhood days helping the previous owners with farm chores. Today, April and her husband Brad provide healthy food to over sixty families in Clark County through their CSA, as well as top local restaurants.

“I grew up down the road, so I have a lot of great memories of being at Annie and Pete’s place,” April recalls. “My love of farming came in large part from being exposed to all the self-sufficiency projects they had going on. There was always something to learn or grow or help out with at their place. It was a small diversified farm. They were mainly homesteading, self-reliant fishermen and foragers, and had a huge garden, eating pretty much everything they grew.  I hope they would be pleased to see what the farm has become.”

April was working a traditional white collar job in the Midwest when she heard the land was for sale. “They say the right people fall into your life at the right time—the right land fell into my life at the right time. I’m a civil engineer by training and had just graduated with an MBA in entrepeneurship, so it was really fortunate timing that I had all this technical and project management experience and also had this business piece. I became a farmer out of absolute necessity because this land has always been a special place for me.”

According to April, there are three things that have to come together to make it all work. There is the land and what it needs and is uniquely suited to do, there’s your own talent and skill set and what you want to bring to the world, and there’s the community you’re operating in. “The best part is when those three things come together. My education was critical in helping me look at the big picture instead of just jumping in. I spent a lot of time thinking about those three things and doing my research.” Photo: David L. Reamer

From the beginning, there was no question April was going to farm organically. The previous owners hadn’t sprayed or done anything with the land for years, but they leased it to a berry grower that was chemical intensive, so the soil was pretty depleted. April let the entire land just rest for about three years before she got started. The first thing she planted was table grapes.

“I’m always intrigued with the crops that aren’t yet really well known but are appealing to me on some level. That’s how I got into grapes. There are a lot of wine grapes growing in the area but not table grapes. Yet, they grow exceptionally well here and there are varieties especially suited to organic production methods. I feel successful knowing that our families and chefs now understand how complex and flavorful grapes can be.”

Research was critical in helping April with her decision. “With perennial crops, you only get one shot, you don’t get to start over the next year. There were several extension publications, as well as a nurseryman and the author of a book on grape growing who both lived in the Willamette Valley and were working to bring a diversity of grapes varieties to our area. Having access to that research and knowledge base was invaluable.”

The research helped her determine what style of trellis to use, as well as which way to run it to reduce the disease issues that come with farming in a really wet, rainy climate. Good research also helped her figure out the best way to orient the vineyard to capture the prevailing winds that keep the leaves dry. “We don’t spray and we don’t irrigate. Because I had access to solid research, I made a number of good decisions early on. So ten years later, our grapes are both low maintenance and very high in value. This is a generously abundant crop, so we are also able to distribute some to families in need.”

April and Brad made a business decision to make the farm a livelihood for two people, with their families pitching in here and there. They grow all kinds of fresh produce and let CSA customers and restaurant clients select what they want from a list that typically includes 35 or so items—everything from apples to zucchini. This year, they added lots of herbs.

Laying chickens and two miniature donkeys that help with soil fertility complete the operation. “We wanted to have a secure, clean source of manure, because research has shown there is a class of herbicides used in the production of conventional hay. These chemicals do not break down in ruminant digestion. So off-farm manure poses a significant risk for our broadleaf market crops. Donkeys require a lower protein diet than horses, which compliments the feedstock we have available on the farm. We maintain our own hay field and the donkeys eat our hay exclusively, along with the occasional apple and carrot! We compost the manure and apply it to our fallow fields. We try to cycle the nutrients right on the farm as much as possible.”

As it turns out, like all good things in a system that works, the donkeys serve multiple purposes. “Kids love the donkeys, so they get to visit with them when their parents come to pick up their CSA share. We think it’s really important for families to see what a working organic farm looks like—to see the quality of food and that it’s not coming from the stereotypical picture of a farm with straight neat rows and uniformity. We have wild patches and forest and weeds that are growing quite contentedly and actually contributing to our system. That’s the education piece we really like, having families see a working farm, not one that’s been set up for somebody’s entertainment purposes.”

“We’re working with NRCS right now on a conservation stewardship program, integrating 0.4 acres of pollinator habitat directly into our annual crop fields and it’s already added value in multiple ways. We put pollinator strips every few hundred feet and vegetables in between them. It’s pretty unique and really phenomenal how much that’s improved the quality of our brassica crops due to reduced pest damage.”

They’ve also opened the farm to Washington State University researchers for a number of years, including a couple of graduate students who are in their third year of doing insect and wild bird counts as part of the Avian Biodiversity and Biocontrol project. There’s been an extraordinary spike in beneficial insects and it showed in the quality of their fall brassica crops. The researchers documented a spike in syrphid (hoverflies) larvae. Adult syrphid flies required habitat the pollinator strips provide in abundance.  These insects are predators of aphids, a primary crop pest. “I also think having some of these perennial crops in the field is helping with the soil structure, providing a safe, untilled haven for healthy microbes and mycorrhizal fungi.”

Last year, April received a grant in partnership with her conservation district to fund soil health research on the farm. “The two most important elements of this project were that it provided me the financial resources and a direct partnership with a regional soil scientist who was specifically interested in looking at my farm and helping me craft pragmatic strategies. Diversified farms are so complex. Being able to call a researcher and ask for help in answering the questions I have about what I’m experiencing in the field has made a huge difference in my approach. Diversified farmers create crop plans every year. Why aren’t we also creating a comprehensive management plan for our most precious resource, the soil?  I’ve learned so much, and have made a number of changes that I would have never understood or been inclined to push for if I hadn’t had research support.

It’s been a game changer for me. The research is farmer directed so I was the one that crafted the work. I wanted to understand all the pieces that play into the health of my soil in terms of how I’m interacting with it, and better understand the nuances so I could create a framework, a soil health roadmap, to guide me in making practical management decisions. Farming can be isolating, and creating farmer-scientist partnerships are crucial. We teach and learn from each other. My soil health roadmap enabled me to make immediate, impactful changes—specifically, how early I’m working to establish my winter cover crops, and how to better manage nitrogen loss. I found out the biggest nutrient losses weren’t coming from produce sales, but rather leeching from heavy winter rains. I’m armed with more knowledge now and feel as if I have real research partners who care about the success of my farm. My goal for the next two years of the grant is to help other diversified farmers create soil health roadmaps that are specific to their farms. Meanwhile, my interns get the benefit of everything I’ve learned so they don’t make the same mistakes I have.

It’s fundamental that we have research and that it’s dedicated to organic systems because we are operating in a different mindset. We see ourselves as land stewards, rather than just trying to produce something for profit in a mechanistic way. The systems we’re engaging with and the disease and pest pressures are very different. Continued research is crucial because the more we know, the more we learn that we don’t know. The most successful trials that I’ve been involved with are those that weren’t just by an individual farmer or researcher but by the partnership between the two.” 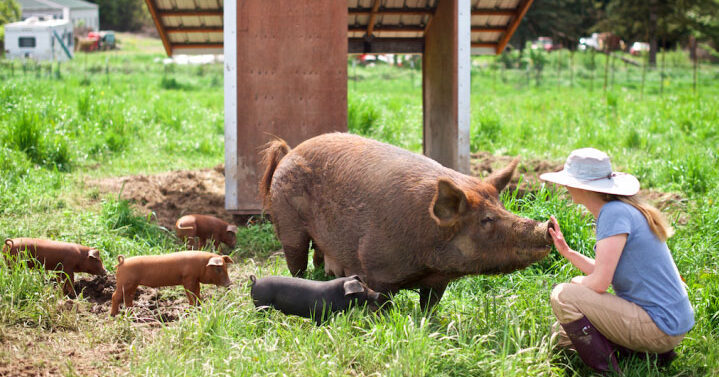 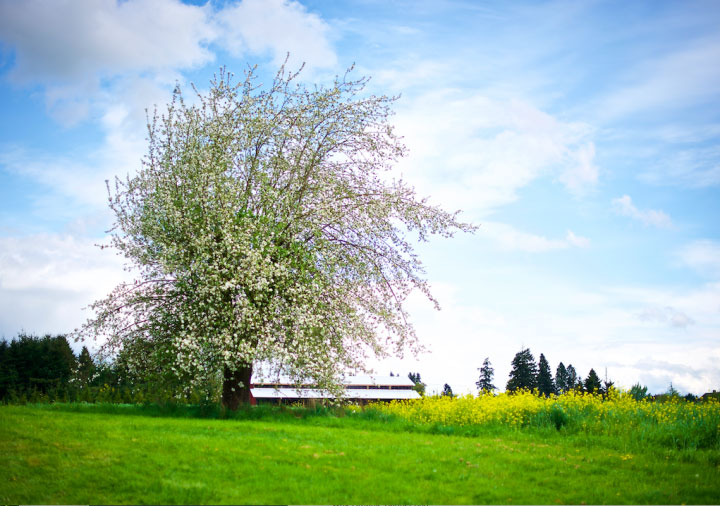 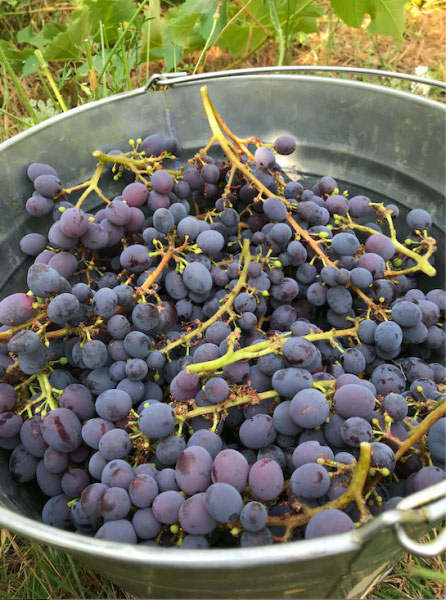 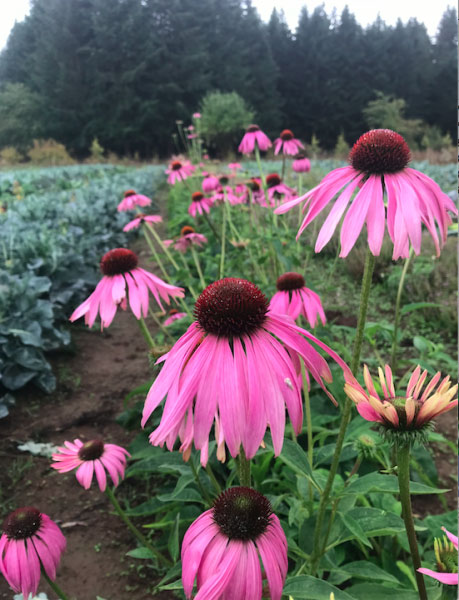