June 19, 2019 – Rory Beyer was raised on the dairy farm his parents have owned since 1973. After graduating from the University of Wisconsin-River Falls with a degree in Animal Science, he returned to the farm and several years later, made the transition to organic production. Today, the Beyers farm 385 acres, raising dairy, beef, corn, and small grains. Since going organic, Rory says the cows are healthier and producing more and, in seven years, they’ve seen their soil organic matter (SOM) go from 1.7% to 4.4% as a result of soil building practices such as cover cropping, managed rotational grazing, diverse rotations, and the use of organic soil amendments.

We caught up with Rory during a hectic spring due to early snow last fall and way too much rain this spring. He’d been up most of the night for weeks working to catch up. I asked him why they decided to transition the farm to organic in 2006 and he said even though they had a really good herd of cows at the time, it was difficult to turn a profit. Health was also a concern. After dealing with health issues all his life, he said it made sense to stop using chemicals.

A devastating flood in 2008—17 inches in 24 hours—also provided impetus for doing things differently. Rory realized he needed to build the organic matter in his soil to help control erosion, retain moisture and nutrients, and manage weeds. After cover cropping, he found the soil was holding better, the biological life was returning, and he was controlling weeds without chemicals.

It wasn’t easy though, he says. “When we were transitioning, the milk price was the lowest it had ever been in recorded history, and 2009 was the worst farming year on the planet. We ended up making it through and successfully transitioning to organic because we had a contract. The banks were willing to back us based on that contract but our production dropped after that. It was tough.”

Rory says they wanted to be with Organic Valley initially but the coop wasn’t taking any milk on at the time. “So, we went on contract with Kemp, and that contract was bought by H.P. Hood. The day we got the okay from the organic certifier, Hood shut down their program and Organic Valley picked up all the milk that Hood dropped. That was a stroke of luck. We forewent the last year of the contract just to be in the Organic Valley cooperative, so we made some sacrifices starting out, but it’s been a long-term good fit for us.”

What advice would he give to other farmers thinking about transitioning to organic production? “Take it easy, don’t rush to get there. It’s a long road, just let it happen naturally. Don’t transition all your land at once, do it in stages. We went full bore and probably could have done it a little easier.”

There was a real bright spot when it came to the cows though Rory says. “We wanted to transition all the cows right away too because we were going to have to know how to take care of them all without drugs to fall back on. The irony is, it ended up being easier. The drugs we were using were just costing us money. I had a $17,000 vet bill that went away in short order just by transitioning to organic and getting the cows into pasture. That’s what made the biggest difference for us. Once you get the cows out, it’s almost like the grass is healing.”

What helped during the transition? “Our biggest resource was the MOSES conference. It was forty miles away and that’s where everyone went. We had some neighbors that had been organic since about 2000 and we were getting advice from them too.”

And now? “The soil health guidebooks from OFRF have been really helpful since my focus is on building soil health. The research is important because It gives us a bridge to greater success in the future, having the understanding and knowledge of how things work can only benefit us.”

The good news is that Rory says he sees a lot of interest from other farmers in transitioning to organic. “I talked to our soil agronomist and he’s been on some farms in Iowa where they’ve been working on transitioning 300 or 400 acres at a time, and they’re having extreme success with tine weeders (a cultivation method that only disturbs the top inch of soil). They’re going out every three or four days and their fields are clean, almost as if they had sprayed. It’s impressive. So, the potential is there for larger farms to make the transition.”

“It’s important for us to know what’s in our food and that we’re doing the best we possibly can for future generations,” says Rory in closing. “We can’t keep using chemicals the way we have the last 70 years or so.”

Listen to the Land Stewardship Project’s podcast to hear Rory talk about building soil health on his organic farm. 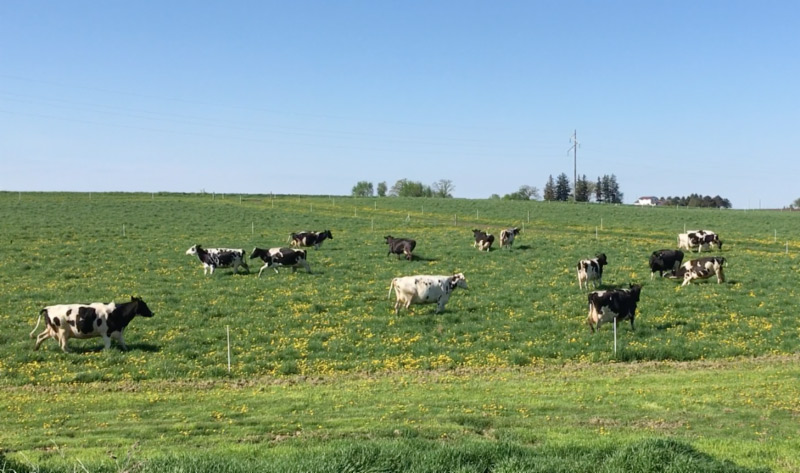