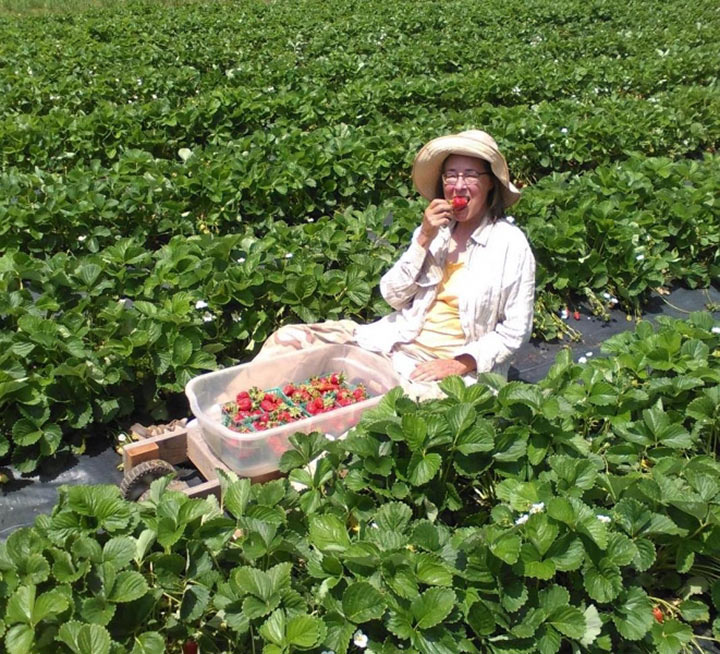 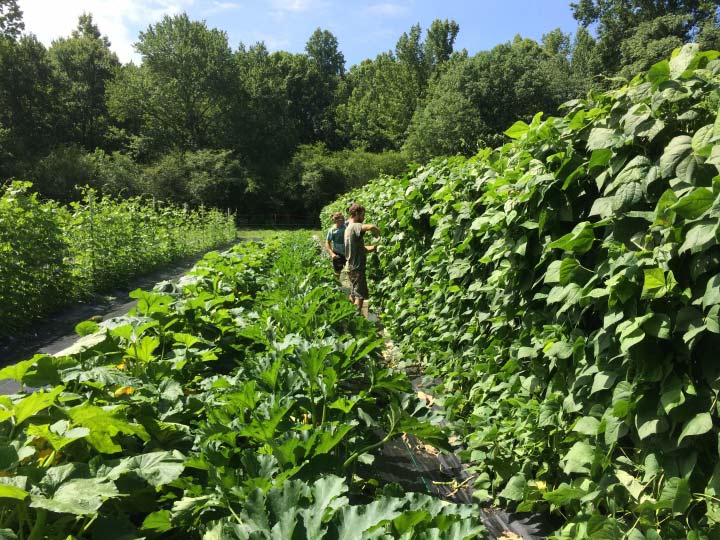 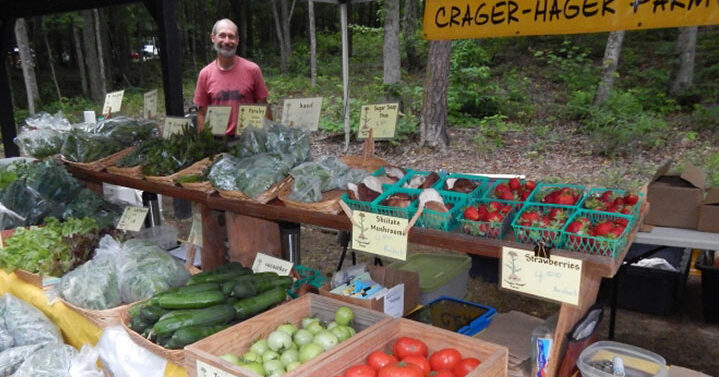 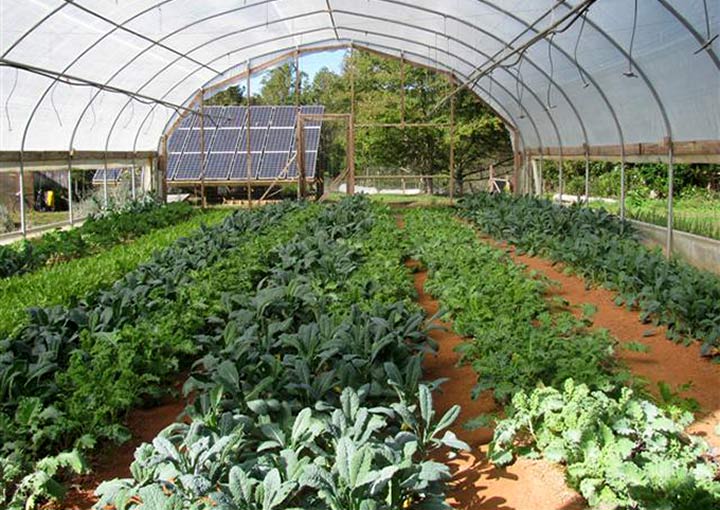 October 23, 2019 – Crager Hager Farm is located in Northern Carroll County, Georgia, a community on the periphery of metro Atlanta. Bryan and his wife Wendy grow over 100 different varieties of fruits and vegetables on the 123-year old farm that Wendy originally purchased as a rural retreat in the 1980’s. They soon expanded their large organic garden into a small diversified organic farm to help serve a community that had lost many of its farmers in the 1960’s.

“We decided in 2006 to try making a living by farming and jumped in. It was a wonderful experience and the most challenging thing I have ever done. I had no idea what I was getting into. It’s totally different when you scale up. I had to figure that out and this was early in the urban/small farm movement and there wasn’t much support out there.”

An avid gardener and outdoor enthusiast since childhood, Bryan adopted organic practices early. “My grandmother got me gardening when I was eight. When I was a teenager, I was spraying malathion for pests when the wind changed and blew it right back in my face. I started coughing and thought this can’t be good for me, I wonder what it’s doing to the environment. I started reading about what it does to bees and other living things. This was known back in the 70’s.”

Wendy and Bryan did not go through the organic certification process right away. “We didn’t feel like we needed it from a marketing perspective because we were selling at the farmers’ market and to a local co-op. After a while though, we decided we needed to put our money where our mouths were. We were very fortunate to have the cost share program to help pay the fees.”

Bryan says to be a successful farmer, you’ve got to keep good detailed records. You have to know what’s worked and what hasn’t and you can’t do that just by watching. “The certification process has pushed me to be more consistent. You have to have the input records, what you’ve put on the land and your plants throughout the year. It actually helped me improve my productivity and how I do my farming.”

Their “crop insurance” program is based on diversification, which helps them manage the challenges of changing weather patterns, pests, and diseases. “The weather is so variable here. Right now, we’re entering a moderate drought stage and different crops do better or worse in different environments. So, given the variability, we grow at least two to three different varieties of any particular crop, whether it’s green beans, tomatoes, or corn. I’ll go through 15 varieties of lettuce over the course of the year because there are cool season lettuces, summer lettuces, and lettuces I start in the fall. If we get a particular pest, disease, or weather-related issue, some of those varieties will do better than others.

One change Bryan has seen over the last 15 years is a warmer winter. “We still get some cold snaps but the average for December, January, and February is getting warmer. Spring is starting earlier and the fall is continuing longer. The impact is that we have to shift our planting schedule. And some of our perennial crops, such as apples and berries, are more likely to get hit by a late freeze when we’ve had a warm winter, which can affect production. We have huge frost blankets that we spread over the berries and we may have to run heaters.”

Another strategy they’re using is growing more crops in hoop houses and greenhouses. “We’re working to manage environments so we can manage the amount of rain and solar heat. With a lot of the crops we grow like tomatoes and peppers, it gets too hot in July and August if you don’t have some kind of shade over them. We’re doing a lot to create microclimates that are conducive to our crops.”

There’s also been a shift in rainfall patterns. “We’re getting less rain during the growing season—May through September—and more in the fall and winter. That means you have to have everything on irrigation and can’t rely on natural rainfall. Even the perennial crops need to be irrigated to prevent drying out in the summer.”

Bryan says right now, as far as they can tell, they are climate neutral if not somewhat climate restorative, primarily because the young forest they’re managing is still sequestering carbon. About a third of the electricity on the farm is provided by their solar electric system and they’re looking to expand that. “Every year we look at trying to do things more efficiently so we can get off the dead dinosaur diet.”

That means managing soil health. “We’re working to build the soil organic matter. We run a small landscaping service in the fall and collect leaves and spread them over about a ½ acre of the farm as mulch. We buy a lot of hay from growers in the area who produce spray-free hay for us. We also do a lot of cover cropping. We’ve been able to build the soil organic matter from the 1-2 percent range, which is typical for pasture soils around here, up to about 4-5 percent. We’re very proud of that and it’s actually higher in our hoop houses.”

Their tillage practices have been evolving as well. “We were tilling a couple of times a year and using plastic mulch to control weeds and hold the moisture in the ground. But we were becoming more concerned about the plastic waste we were generating and it made it very hard for us to keep up the soil organic level. So, we started working on some other systems. A grower in North Carolina named Alex Hitt started using landscaping fabric instead of plastic mulch, which allowed him to mulch his crop without having to do the heavy tilling because you can lay it over the top of the land and you don’t have to bury the edges. Then we developed a system where we don’t have to do any tillage. We grow the cover crop, mow it short, add some nutrients, lay the landscape fabric over it, and plant through the landscape fabric. That allows us to cut the tilling down to once every two or three years for most of our field area.”

They also do a lot of trials. “I’m in search of the perfect red tomato for Georgia. We’ve also been doing our own breeding program for tomatoes, beans, kale, and broccoli. We select for crops that work best in our environment. One of the problems organic farmers face is that there are few breeding programs for vegetable crops that are targeted at organic, so it’s been left to the farmers to do their own.”

Why is it important to breed specifically for organic? Because it’s a totally different growing system says Bryan. “We are not using the water-soluble fertilizers. We need crops that have a more robust root system to break down and use the organic nutrients we are providing. We need crops that are more resilient to various pests because we are not going to be using fungicides and insecticides.”

And, there’s the changing weather, which demands a high level of adaptability. “In the southeast, the climate zones are shifting north an average of 15 miles per year. In the last two decades, we’ve shifted almost a full climate zone. That’s like moving us 200 miles south, so we are constantly having to trial different crops. We’re facing two things, the challenge of farming organically and the shifting climate. The work that we are doing as organic farmers to build the health of our soil gives us some protection. We are not as prone to disease outbreaks that you’ll see on conventional farms. But we do have the continual pressure, and as that shifts due to climate change, we have to constantly recreate and fine-tune our systems.”

In closing, Bryan offers this. “In my opinion, organic agriculture is the foundation for developing a sustainable food system, one that is both good for the environment and good for people. Right now, that means you’ve got to spend more on labor to manage things. If you do have a pest problem, you’re going to be using more expensive inputs to control it. You’ll probably have a yield loss because in order to have the good bugs around you’ve got to have some of the parasitic bugs they feed on. You’ve got to be willing to accept some damage to your crops in order to maintain that diverse ecosystem. By building a diverse ecosystem instead of killing everything with pesticides, you’re not in a continual arms race with pests that adapt to the pesticides. You sacrifice a small percentage but you keep the beneficials around. All of those things add to the cost of producing but they provide these huge community benefits.”