April 3, 2020 – Wild Hope Farm is a certified organic farm owned by the Belk family and located in Chester, South Carolina. The Belk’s have been transitioning their land over the past few decades from forest to dairy farmland, and from corn intensive production to hay. Their focus is on replenishing the eroded soils to transform it into an organic operation collectively benefiting the community and the surrounding ecosystem.

As stated on their website, they are working to go beyond organic to enable a more nutrient rich soil which in turn nourishes the plants they grow and the bodies of those who eat their produce. The practices they use are simultaneously decreasing off-farm inputs (e.g., pesticides, fertilizers) and increasing the health of their ecosystem through a polyculture of crops, a diverse insect ecology, and enhanced soil microbiology. With intentional planning of their land and infrastructure, they hope within the next few years to use zero net energy.

We recently interviewed Shawn Jadrnicek, who manages the farm and has been working with the Belk family for about three years. We were also joined by Katherine Belk, who works on the administrative and marketing side. Katherine takes beautiful photos of the farm, a few of which are featured here.

They currently farm about 12 acres but have 220 acres overall, much of it forested. They employ 9-12 staff, depending on the time of the year, and have been doubling production annually.

Much of their business comes from their CSA program and farmers’ markets. They also sell to a few restaurants. This year, they’re dedicating an acre and half to wholesale as a trial. Among other regenerative organic practices they are using to build soil health, they’ve had a great deal of success with a no-till approach to prepping their fields, which minimizes disturbance and protects the living organisms that feed their soil.

Katherine says they are working to share their practices with the larger community to increase understanding of the importance of no-till techniques for the future of agriculture and sustainability. “We’re trying to help people get on board and better understand why it matters for them,” she explains. “We’re farmers in the watershed they use and our farming practices do impact our neighbors even if they don’t feel it directly.”

They’ve been able to consistently produce 50% of their crop in a no-till system through the use of cover crops such as cereal rye and crimson clover, adding mulch to extend the benefits. “Once the cover crop is mature, we terminate it with the roller-crimper and transplant through it,” explains Shawn. “It does have a limited planting window, so we’ve developed techniques to extend the amount of no-till and cover cropping you can do. The main thing we do is use wood chips in no-till areas. So, we’ll crimp the cover crop and if we have a long season crop like eggplant or peppers, we put wood chips down. The cover crop helps with weeds, but if you add the mulch you get six months or more. We also use shredded leaves when we can. We do all of our winter squash that way, as well as our eggplant, peppers, tomatoes, cantaloupe, watermelons, summer scallions, and some lettuce, as well as some successions of cucumbers, summer squash, and garlic.”

“We’ve been working the past three or four years to develop a summer mix we can crimp and then plant our fall crops through. This year, we got a SARE grant to expand our work in that. We’ve got four different mixes we’re going to try. Then we can plant our fall vegetables into cover crops, which will allow us to expand our no-till work pretty drastically. You can save so much time when you do no-till. You don’t have to do the weeding and it’s probably about fifteen less passes with the tractor. That saves labor and fuel costs as well as wear and tear on the equipment.”

Shawn says another challenge is the timing. “If you don’t plant your cover crops at the right time, they’re not going to be dense and lush and mature early enough to do well. Cover crops need tending to and fertilizer just like cash crops. I’ll usually precede the no-till cover crop with a nitrogen fixing cover crop such as cow pea to add fertility. That’s critical. Right now, I have a field where I did that and a field where I didn’t do that, and it wasn’t dense and lush. If you don’t have a big enough biomass to suppress the weeds, it’s not going to work.”

“Once you do that initial prep to get rid of the weeds, you can put it into your rotations easier. For example, we’ll do a spring crop of brassicas and those come out pretty early. We’ll follow that with a cover crop of cow peas and millet or cow peas and sudex. We try not to do a lot of double cropping, it helps with the weeds and helps build soil. It also helps reduce the use of inputs. You have to have the land to do that so it can be difficult for smaller farmers.”

They also use manure from a neighboring horse farm to add fertility and that’s been working well says Shawn. “We can extract the heat from the manure for our greenhouses and add it to the fields in the fall before we cover crop. The horse manure has a lot of phosphorous and potassium in it, but the nitrogen isn’t really available until the second year because of the wood shavings in the bedding. We’ve been applying the manure around 20 tons per acre. This was the first year, so we’ll have to wait to see the results.”

Shawn says recent soil tests show promise. “We had a field that tested low for phosphorous and potassium and we were looking at spending four or five thousand dollars to bring that up. We tested it again after the manure application and everything is right where it needs to be. It’s already paying for itself.”

Katherine says they are working to insure themselves the same as they would during the hurricane season by making sure they have cover crops in the ground. “We have overhead irrigation systems that water our cover crops during the drought and then we go straight from drought to hurricanes,” she explains. “You feel it every day on the farm and that’s why it’s really important to get to know your farmers and the ways they’re farming so we can make our whole ecosystem more resilient in the future.”

“This is one of the wettest springs in recorded history here in our region,” Shawn adds. “We’ve had a very difficult time prepping the fields. The window has been narrowed. This year it was almost impossible. So, we’re looking at getting silage tarps, which is what a lot of smaller farmers are using. We’re trying to develop a system where we can do that on a larger scale in our fields. We’ll apply those tarps to the fall cover crops to keep the soil dry in the wintertime.”

Another technique they’re using is to make sure the beds are sloped properly.” I try to slope the beds at a quarter percent to one percent because if they’re too steep, you have erosion, but if it’s not continuous then you have puddling. It’s a long-term process doing that field grading. Every year, we’re trying to do a little more.”

To bring in beneficial insects, the Belks grow a lot of wildflowers. They have a 60-person flower CSA, sell wholesale to florists, and provide flowers for weddings and other events. They’ve also been planting perennials such as fruit trees and have a large cactus fence surrounding the farm. Katherine’s father, Tim, is very passionate about native plants and he’s doing a seed and grass restoration project on the farm that includes about 12 acres of native grasses and wildflowers. Katherine says, “It’s amazing to go out there in June or July as the different flowers come into bloom and see how our land is transformed and the different animals that are coming back. We’re trying to do regenerative land management beyond just the ways that we’re farming. It’s about how we take care of the property.”

“One thing I really enjoy about the CSA model and farmers’ markets,” adds Katherine, “is being able to interface with people. There’s a lot that goes into being an organic farmer. As soon as people start to learn, they realize how little they knew and they want to learn more. It’s just a matter of being able to communicate with people in a way they can understand.” Katherine uses social media and email to give people an idea of a day in the life on the farm. “The more we communicate with people, the more they begin to realize that all of these things are interconnected.”

“I want to eat clean food that wasn’t coated with any synthetic chemicals for my own personal health. I think consumers are beginning to catch on because we’re starting to see all of these autoimmune diseases and allergies and other sorts of physical reactions to our environment, and I think glyphosate has played a big role in that. I know they are still trying to draw those connections there. Also, from a sustainability perspective, by purchasing organic, consumers can invest in farms rather than chemical companies. Yes, growing organically is slightly more expensive up-front but I think that we’ll be able to have better yields in the long-run.”

“We’re taking a long-term approach to farming and we’re relying more on natural ecosystems by creating retention ponds that attract beneficial animals like frogs and toads and increasing our organic matter, which also helps with pest prevention in addition to erosion and other related challenges. We’re essentially creating an environment where we can be more resilient in the future. As the person who pays the bills, the fewer inputs we can have, the happier I am.” 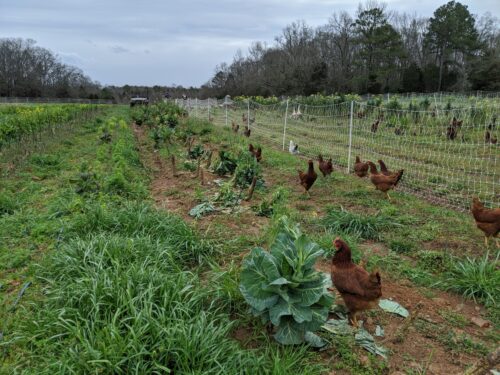 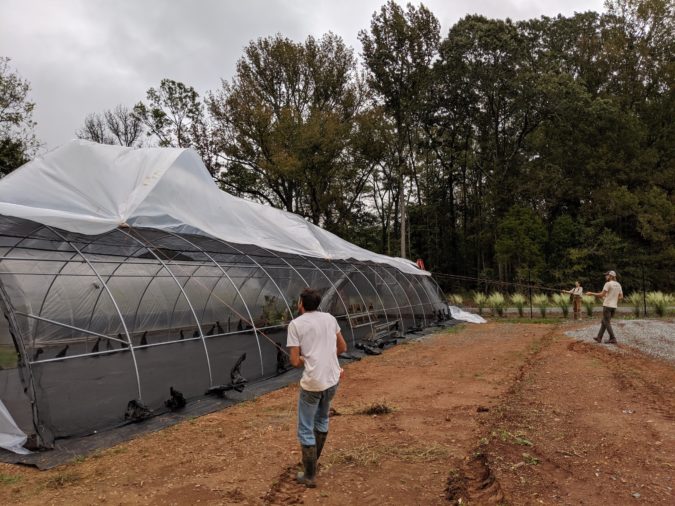 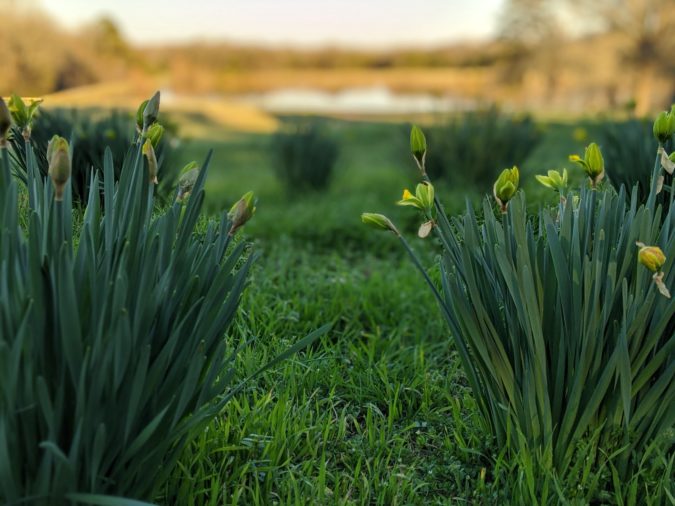 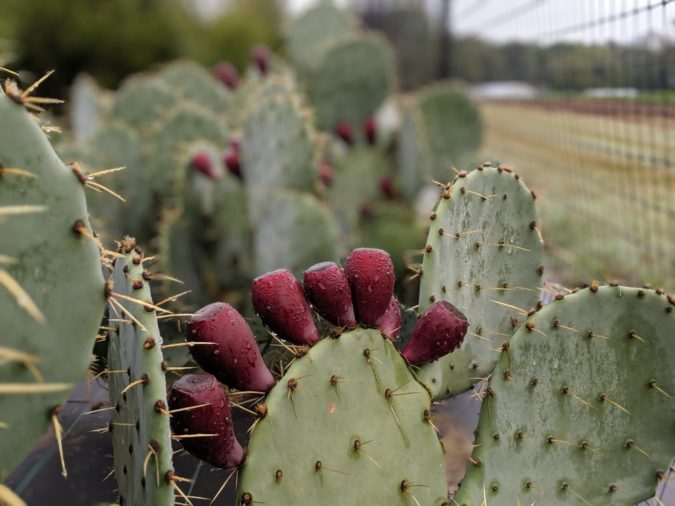