The Organic Farming Research Foundation is honored to share this farmer story, featuring Shaheed Harris, farm manager at Sumpter Cooperative Farms. The following article is based off of an interview with Shaheed that was conducted earlier this year by OFRF’s staff. You can also press play below to hear Shaheed Harris tell the story of Sumpter Cooperative Farm in his own words, or click here to download it and listen later. Based in Sumter, South Carolina, Sumpter Cooperative Farms (SCF) is a cooperative of organic farmers founded by Azeez and Fathiyyah Mustafa who, in 2003, became the first certified organic farmers in the state.  At a time when Black people represent only 1.4% of farmers in the United States and make up just half of a percent of certified organic producers, the SCF-Organic Farms LTD are trail blazers among these “one percenters.”

In addition to growing kale, asparagus, sweet potatoes, and even lemongrass tea, to name just a few of their crops, SCF’s mission is to mentor farmers and educate consumers about the benefits of vegetables and fruits grown with organic and heritage dry-farming methods and also to address food deserts (or areas suffering from food apartheid) in South Carolina and beyond. At a time when most farming focus group participants report that certified organic farmers are the most valuable resource for information, SCF provides a critical service and helps BIPOC producers to transition into the organic sector.

Shaheed Harris, the farming manager for SCF, describes the 60-member cooperative of organic farmers as an incubator for bringing people, young and old, back into farming. The roots and challenges of farming run deep in Harris’ ancestry and, he says, are part of the history in this country.

“Specifically with black people, they have a history of relating farming to slavery. But in this current time, farming should be related to freedom.”

At the beginning of the 20th century there was a vibrant Black farmers movement that emphasized organic and sustainable methods, as well as democratically managed farming cooperatives (National Organic Research Agenda, 2022). The movement was so empowering that the percentage of farms and farm acreage in Black management roughly reflected the percentage of Black people in the U.S. population (White, M. 2018. Freedom Farmers: agricultural resistance and the Black freedom movement. University of North Carolina Press, 189 pp.) These farmers practiced many of the organic farming principles that align with today’s National Organic Program (NOP) standards. “They were organic before the word organic was ever used,” says Harris.

But Jim Crow era dispossession of Black-owned farmland and structural racism in U.S. agriculture set Black farmers back by a century, making it difficult for them to secure the capital and financial resources necessary to support a successful farming operation.

“They couldn’t afford irrigation. They couldn’t afford the big equipment,” says Harris when talking about previous generations of farmers in his family. “So, they had to rely on nature to survive. You have to adjust to nature and what nature offers.” In the process, Harris says, “You’re also adjusting your plants to be better, and you’ll be healthier for it.”

“Farming is an ongoing learning experience” 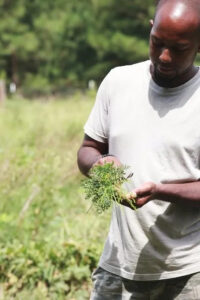 One approach toward helping disadvantaged farmers deal with challenges may be through SCF’s vision for transforming communities into self-sustaining micro food economies by using low cost, forgotten skills practiced by previous generations in order to thrive.

Then and now, Harris describes farming as a community building tool. To that end, SCF Cooperative conducts educational workshops, seminars, and presentations about sustainable agriculture and organic farming for the benefit of farmers and their families in the community. They even offer YouTube training videos to help farmers, for example, become certified organic producers.

SCF has participated in Natural Resources Conservation Service (NRCS) programs such as the Environmental Quality Incentives Program (EQIP), using the program to extend their growing season. A high tunnel and a hoop house allow SCF to start plants early for transplants and to provide protection over the winter for certain crops. SCF also helps new farmers navigate NRCS conservation programs—helping them find the right program and guiding them through the application process.

“People come through, they learn, and they go on to greatness. That’s what we want them to do.”

Still, affordability problems, in the way of operational costs and lack of capital, continue to challenge BIPOC farmers like Harris even now. Half of those surveyed for the 2022 National Organic Research Agenda (NORA) report indicated that access to financing to support their farming operation is an institutional obstacle, which is why cost-share programs such as EQIP are particularly helpful in aiding transitions to organic farming. 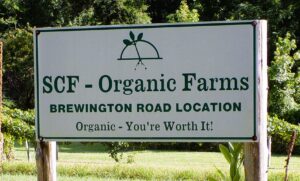 One of the most significant SCF initiatives is the Midlands Organic Mobile Markets, vans that directly distribute locally grown organic foods to the food deserts and other communities in the Midlands region of South Carolina. Established in 2012 through the Agricultural Marketing Service and the Farmers’ Market Promotional Program, the project aims to address the interrelated problems of limited access to healthy foods and diet-related disease.

Harris says the mobile markets serve the “in between” and beyond the metro areas, such as Columbia, South Carolina, which is 45 minutes from the 22-acre farm he manages.

“Those places are areas like Eastover and Rembert, for example, where they don’t have a grocery store. A lot of people don’t have vehicles to drive and they’re basically living on the nearest equivalent of a gas station. So they’re eating out of a gas station and getting chips and all types of processed foods that don’t really have a lot of nutrition.” Through the Midlands program, Harris says SCF aims to serve the people in these areas who would not otherwise have access to fresh healthy foods. As part of its conservation efforts, SCF works with the soil to build a natural ecology. Through cover crops, such as peas, legumes, oats, and winter rye, SCF helps build organic matter in the soil. “Some people use chicken manure or fertilizers, but we try to build our soil the natural way—through crops that absorb nitrogen from the atmosphere,” says Harris. “We do a lot of companion planting and crop rotation, and very little tilling.”

SCF also practices and teaches the art of Heritage Organic Dry Farming, described as a way to grow food in a manner that does not have an adverse effect on the environment and is better for the land by utilizing residual moisture in the soil from the rainy season. On its 10 acres that are dedicated to certified organic produce, SCF grows melons and squash, for example, during the dry season with no supplemental irrigation in the heat of the South Carolina summers. This method offers a promising alternative in times of uncertain water resources. So how does dry farming work?  In short, the farmer or gardener starts to work the soil soon after the last rain of the season. By disking and using a roller, the goal is to create three to four inches of dry, even soil when cultivation is done. This “dust mulch” or “dust blanket” traps the moisture in the soil. This technique requires a minimum of 10-12 inches of rain during the rainy season, and the soil must have good water holding capability for this technique to work. Sandy soils don’t qualify.

Organic farming and organic practices, according to Harris, are basically “old school,” valuable hand-me-downs from his farming heritage. That’s why, he says, the water-conserving practice during the dry season is called “Heritage Organic Dry Farming.”

Dry Farming helps to address a problem that three-fourths of the BIPOC survey respondents in the 2022 NORA report identified as the most pressing challenge for organic farmers: weeds. Dry Farming produces very few of them because the “dust mulch” layer is dry enough to prevent weed growth, which makes herbicides unnecessary.

To Shaheed Harris and his daughter Asya, farming represents freedom. “If you can get a piece of land or even if you have a yard, a backyard, or just a balcony, everybody should be doing farming whatever your profession or passion may be whether you’re an actor, a rapper, singer, doctor, plumber, or janitor,” says Harris. “Farming should be a part of your life, just like eating or cooking a meal. That’s how we look at farming. It’s a way of life for survival and for community stability.”

Just as it was with his ancestors.

OFRF would like to thank Shaheed Harris and everyone at SCF for sharing their story. This interview was created with funding from the National Sustainable Agriculture Coalition, Organic Valley’s “Farmers Advocating for Organics” program, and the USDA Natural Resources Conservation Service. OFRF thanks these and other funders for their support.