Building a Resilient Future in Food and Farming

Building a Resilient Future in Food and Farming

June 16, 2020 – Editor’s Note: This blog post was originally published on the National Sustainable Agriculture Coalition’s (NSAC) website on May 28, 2020. The post has been updated and modified by Cristel Zoebisch, Climate Policy Associate for NSAC and OFRF, to incorporate a focus on organic agriculture’s role in meeting the goals outlined in the Agriculture Resilience Act introduced by Rep. Chellie Pingree (D-ME) in February 2020. OFRF will cross-post relevant blog posts from this series covering provisions of the ARA that impact or highlight organic agriculture’s role in addressing climate change. The ARA represents the first comprehensive piece of legislation introduced in the House of Representatives addressing climate change and agriculture. 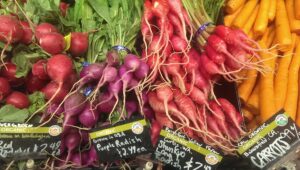 Americans today are faced with a failing food system. Bare shelves in grocery stores are accompanied by vegetables plowed under, milk poured down drains, and animals euthanized and buried. The COVID-19 disruption has shown the lack of resilience of American agriculture and the processing and distribution of its production. This disruption is not the first and it will not be the last that our food system will experience. Climate change is the foremost long-term disruption we face. Managers of America’s farm, forest, and grazing lands could play a crucial role in combating climate change.

The road to a more resilient agricultural system will be long and hard. Fortunately, far-sighted Members of Congress have joined NSAC, OFRF, and many other organizations to begin the first steps on that road. Earlier this year, the Agricultural Resilience Act (ARA) was introduced by Rep. Chellie Pingree (D-ME) to begin the process of transforming American agriculture into a system that can rebound and adapt no matter what disturbance arises, including climate change.

ARA establishes a set of aggressive but realistic goals for farmers to help mitigate climate change and increase agricultural resilience, starting with the overarching goal of reaching net zero greenhouse gas emissions from U.S. agriculture by no later than 2040. Net zero means that all remaining ongoing carbon, nitrous oxide, and methane emissions are offset by removing an equivalent amount of greenhouse gas from the atmosphere. The single generation 20-year timeframe to reach that goal is achievable but only if appropriate policies are put in place soon. The bill provides a science-based blueprint through which U.S. agriculture and food systems can meet the challenge of the climate crisis.

ARA supports longtime organic soil health practices such as cover-cropping, rotational grazing, and composting, and the bill’s focus on multi-year support for research and resilient soil health practices is critical for our food supply and protecting our natural resources. ARA highlights the importance of sustainable and organic farming to mitigate the effects of climate change.

ARA’s substantive programmatic sections are divided into six additional titles, the key building blocks for creating a more resilient agriculture. Each of these titles is summarized below, concluding with the corresponding goals set by the legislation.

Healthy soils not susceptible to erosion are the foundation of agricultural resilience. Without them, a prosperous agriculture is impossible. A key to healthy soils is incorporation of more organic carbon in the soil. ARA encourages farmers to pull carbon out of the air and into their soils—removing greenhouse gases and increasing soil health. Soils containing more carbon capture and hold more water to help farmers deal with both drought and torrential rains.

Intensive row-crop agriculture has caused the loss of an average of 30 to 50 percent of carbon and organic matter in U.S. agricultural soils prior to such intense cultivation. Farmers have the tools to restore most of the carbon we have lost and, in the process, help reverse climate change. These tools include diverse crop rotations, cover cropping, conservation tillage, and other practices to build soil health.

A first step in restoring soil carbon is to keep soils under cover as much as possible. Bare soils erode and release carbon into the atmosphere. The bill sets the goal of increasing cover crop acres across the country to at least 25 percent of crop acres by 2030 and at least 50 percent 2040, with at least 50 percent of American cropland acres covered by crops, cover crops, or residue year-round by 2030 and rising to at least 75 percent by 2040.

The National Organic Standards require certified producers to implement crop rotation, cover cropping, tillage, nutrient management, and other practices that improve and maintain the physical, chemical, and biological condition of the soil, so organic agriculture can help meet the soil health goals outlined in the ARA.

ARA Goal: Restore at least half of lost soil carbon and maintain year-round cover on at least 75 percent of cropland acres by 2040.

The conversion of grassland and forestland to cropland results in net greenhouse gas emissions. Conversions of native grasslands and forests to agricultural uses have resulted in large amounts of carbon lost from soils in the past, and losses on a smaller scale continue each year. As urbanization demands increase, agricultural land is also at risk of conversion to development. Converting agricultural land to development will have negative impacts on greenhouse gas emissions and our ability to store carbon in our soils. Long term it could also pose a threat to our food security.

ARA Goal: Eliminate conversion of agricultural land and grassland by 2040.

The best soils in the world were created by grass-eating animals herded by predators to intensively graze and incorporate their manure into the soil. ARA seeks to reestablish such soil-building systems with modern management-intensive grazing on all pasture lands in the U.S.

Unfortunately, most animals in the U.S. rarely see pasture. They live in large confinement facilities which generate methane, a potent greenhouse gas. Adaptive grazing methods improve soils while reducing methane production. The more we move toward carefully managed grazing-based systems and the re-integration of livestock with cropping systems, the better the climate mitigation results. Given the dominant role of confinement systems today, the transition will take time. But the methane produced by confinement facilities can still be reduced through the conversion of wet manure handling and storage systems to dry storage and composting, reducing methane emission and creating a source of organic carbon for our soils.

ARA Goal: Establish advanced grazing management on 100 percent of grazing land, reduce greenhouse gas emissions related to the feeding of ruminants by at least 50 percent, increase crop-livestock integration by at least 100 percent over 2017 levels, and convert at least two thirds of wet manure handling and storage to alternative management by 2040.

The COVID-19 pandemic has exposed the vulnerabilities and instabilities of our current food system. Reports about unharvested crops, dumping milk, and farmers having to euthanize their animals due to processing plant closures have made headlines across the country. Simultaneously, food banks have seen an increase in demand from struggling families.

Many farmers have surplus food available since they have lost their customers due to closures of farmers markets, schools, and restaurants, but the infrastructure is not currently set up to connect farmers and families in need of food. The waste of food in the COVID-19 crisis is heart-breaking when many are going hungry. However, food waste has long been ubiquitous in our food system.

None of the above goals can be reached without significant expansion of investment in research on climate change adaptation and mitigation, soil health, agroforestry, advanced grazing management and crop-livestock integration, on-farm and food system energy efficiency and renewable energy production, food waste reduction and related topics to accelerate progress toward net zero emissions by no later than 2040.

Our food and agricultural system affects public health, environmental protection, climate resilience, and the rural and national economy. However, federal funding for food and agriculture research has stagnated for decades, jeopardizing our future and hindering our ability to innovate in ways that improve farm viability, rural vitality, public health, and food security.

OFRF fully supports ARA’s goal of quadrupling federal funding for food and agriculture research and extension by 2040. Since its inception, OFRF has worked to cultivate organic research, education, and federal policies that bring more farmers and organic acreage into organic production. OFRF and a coalition of organic champions reached a historic win for organic agriculture in the 2018 Farm Bill by securing permanent funding for organic agriculture research and education through the Organic Agriculture Research and Extension Initiative (OREI). OFRF will continue to work to inform increased investment by ensuring future research and programs are relevant and responsive to the top challenges facing organic farmers and ranchers, including climate change.

ARA Goal: Quadruple the total federal funding for food and agriculture research and extension by 2040.

ARA proposes specific tools and incentives to achieve all the above goals. More detail will be provided in additional blogs in this series over the next few weeks.

ARA is a first step toward transforming our food system to make it less susceptible to disturbance whether from a virus, climate change, or any unknown and unanticipated disruption.

A resilient U.S. food system is possible. We must take the lessons learned from the COVID-19 crisis and begin the journey to a safe and reliable food system for America. ARA sets a path forward for agriculture to survive and thrive and be part of the solution to the climate crisis.