The Organic Farming Research Foundation is honored to share this farmer story, featuring Jesse Buie, president of Ole Brook Organics. The following article is based off of an interview with Jesse that was conducted earlier this year by Thelma Velez, OFRF’s Research and Education Program Manager. You can also press play below to listen to an edited version of the interview, or click this link to download it to listen later! Jesse Buie is one of those farmers who has been farming most of his life. “People always say ‘all their life’,” he jokes, “but yeah, that’s basically it.” Jesse grew up exposed to farming, with a father and grandfather who farmed. He explains that his interest in organic farming stemmed from his family’s history with farming, because “organic farming today is so similar to the farming practices they used back then. It was a continuation of the way I farmed my entire life,” he says.

Now Jesse is the president of Ole Brook Organics, a three acre mixed vegetable farm, situated within a larger 64 acre property in Lincoln County, Mississippi. The farm focuses on growing radishes, melons, ginger, turmeric, wheatgrass, and microgreens, and Jesse also has a handling license which allows him to process private label products, such as turmeric powder. In addition to growing food, Jesse works hard to help other farmers learn about what it means to be certified organic. He has served on the National Organic Standards Board (NOSB), and regularly teams up with the local agricultural Extension Service, National Resource Conservation Service (NRCS), and Farm Services Agency (FSA) to offer info sessions about becoming organic. “For the past five years I’ve hosted workshops on the farm,” Jesse says. “We’d had as many as 100 participants,” he explains, of these sessions where farm support agencies gave presentations on the services that they have available for farmers. 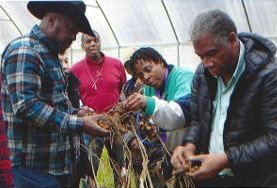 Farming is “tremendously rewarding,” Jesse says. “We in the business need to be all about getting others involved. I don’t know how it’s going to happen, but we need to figure it out.” That’s part of why Jesse is so committed to helping educate other farmers about what it means to be organic. To this end, in addition to hosting workshops Jesse has also assisted in getting the word out to other farmers across the south about what support may be available for them from these organizations.

As a farmer in the southern region, one of the main environmental factors that Jesse deals with is a lot of rain. Excessive rain can cause leaching of nutrients from the soil, and specifically loss of nitrogen which is critical for plant growth. Jesse relies on soil tests to help him understand and monitor his soil health. “Each year I start with a soil test of the whole area,” he explains. The farm is divided up into 8 separate square areas, each with a different field name. “Even though it’s a small farm there are different soils throughout those areas,” he says. He collects a representative sample from each area to send in for analysis, then uses the results to see how best to improve the soil in a specific area, depending on what crops he is planning to grow there that season. The soil testing laboratories provide specific recommendations for amendments depending on crop.

Adding amendments to the whole farm for a crop could be very expensive, but by testing smaller plots, Jesse can add amendments to smaller areas specific to what they are going to grow there. With organic agriculture he explains that it’s common for soil health to stabilize over time, so that fewer amendments are necessary. “I’ll still have to add some,” he says, “but it won’t be as much.” He is looking forward to reaching that point with his fields. As he works towards that, one of the main ways that Jesse focuses on building healthy soil is by making sure that he is constantly adding organic matter to the soil. At Ole Brook Organics they do this primarily by incorporating all the plant matter back into the soil. It’s extra important to keep everything in the field that he can. Any grasses or crop residue are chopped up and tilled back into the fields after a crop is finished.

But high soil organic matter can be a double-edged sword in a wet region. “Soil with high organic matter content holds moisture,” Jesse says, “which is what it’s supposed to do. But then  I get bogged down and can’t get out there with the big equipment.” When fields are too wet to work with a tractor Jesse adapts by switching to using hand tillers, or other lighter weight soil cultivation tools. These let him work the soil when it might be too wet to access with heavier equipment.

The heat is also an issue for farmers in the south. Jesse uses a drip irrigation system, and has come to understand that if he can manage the irrigation properly, most crops are happy with the warmer weather. “The heat is just bad on me,” he says, chuckling. The crops are most sensitive at the time that they are transplanted out, so Jesse focuses on growing strong transplants, and hardening them off so they’re adjusted to the heat, and then keeping the soil moist until the plant roots can get established in the ground. 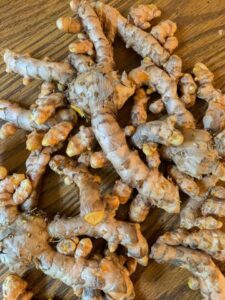 Ole Brook Organics utilizes a 30 x 100’ high tunnel. Jesse primarily uses the high tunnel for his ginger and turmeric production, which take 9 months to reach maturity. Each year half of the high tunnel is planted in ginger and turmeric, and the other half is a mix of shorter season annual vegetables like tomatoes, that benefit from the extra heat and season extension of a high tunnel. The following year, those crops switch sides. “It’s not the most efficient,” Jesse admits, “because with ginger and turmeric, when you harvest, you could just be breaking off a piece and dropping it back in the same place to replant as you go. But if you need to rotate, you can’t do that, you have to pull everything and replant on the other side.”

With the abundant rains in their region, an unexpected side effect of the high tunnel has been that they get a lot of rain running off the sides of the tunnel. That moisture travels laterally through the soil, and ends up saturating the inside of the tunnel. To address this issue, Jesse is considering finding a way to divert the water off the tunnel, such as creating a drainage ditch around the perimeter of the tunnel. Generally though, he is able to manage the conditions inside the tunnel just by airing things out. Both sides of the high tunnel roll all the way up, which allows Jesse to manage both the temperature inside the tunnel as well as the soil moisture. “You can open it up really well,” Jesse says, “and it will dry out in there, as long as it’s not raining.”

One of the crops that Jesse enjoys growing at Ole Brook is straight neck organic squash. “They’re beautiful,” he says.” But he’s not the only one who appreciates them. “I guarantee that squash bugs will find it,” he says, shaking his head. The key to pest control that he’s found is to not let it get out of hand. “There are some organic approved substances for pest control,” Jesse explains, “but it’s not effective on the squash bugs.” Instead, the method he prefers is to physically patrol for the bugs by inspecting the plants for the first few days after they get transplanted out. “I walk those rows and look under the plants for any eggs and kill them right away,” he says. This is one example of how organic farming can be a labor intensive process. “But if you keep up with it from the start,” he says, “that’s the best.” Other organic methods for pest management include row cover to exclude bugs from a crop that they like to eat, or introducing beneficial insects who predate on the pest bug.

That’s the thing about organic, it complements diversity, and that’s what we need to make this whole process successful.

Jesse also grows edible flowers which attract beneficial insects and pollinators to the farm. He has observed a difference in pollination rates when he has flowers in bloom on the property. ”Production drops when the flowers aren’t present and the pollinators aren’t present,” he says, which is another reason to diversify the crops he grows, and to try to have something blooming on the farm at all times. “That’s the thing about organic,” he says. “It complements diversity, and that’s what we need to make this whole process successful.” 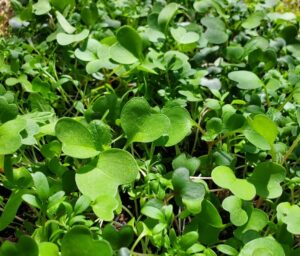 It really came down to three things for Jesse, when deciding to become certified organic. For one, he says “it really was a continuation of the way I’d been farming most of my life.” Second, Jesse has a background in hospice work, and through his experience in that field he knew that the physicians he worked with were often “very serious about no pesticides, and no synthetics in the foods for the patients, because of their compromised immune systems.” He understands that there is a health benefit. “Being in healthcare,” he says, “so much is about prevention, and that’s what organic is. You eat quality food and you may prevent some health problems.” And the third reason, he says, “was a numbers thing.” The price was higher for organic produce than conventional, so there was an economic incentive to farm that way.

In Jesse’s experience most customers who want organic are willing to pay the price for it, because they understand what went into it. “They see that USDA organic symbol,” Jesse explains, “I’m proud to put that on my products… It shows adherence to standards.” 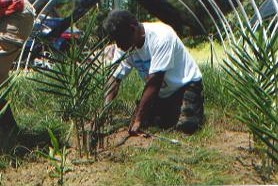 When he was starting Ole Brook Organics, Jesse was able to choose a site that had been dormant for the past 15-20 years, which allowed him to work with California Certified Organic Farmers (CCOF) to become certified organic “right out of the gate.”

The area surrounding the farm includes timber, ponds, and other wildlife and pollinator habitat, which he had worked with the extension service and NRCS to develop and manage. “I’m gonna be honest,” he says, “environmental concerns were not part of the reason [for organic certification] at the beginning.” But, he explains, Ole Brook had been “all about the environment all the way,” in terms of the management of the timberland, ponds, and wildlife habitat surrounding the organic farm plot. He saw the organic certification as a continuation of that holistic way of taking care of the land. The organic label is a quality standard that Jesse appreciates because it is a way to prove that the food you’re producing is clean and coming out of healthy soils. “I’m so confident with the radish I grow that I will go out in the field and pull it up and just eat it right there, because I know the standards that I grow by” he says, proudly.