November 20, 2020 – Organic producers in the South face tremendous challenges from weeds, pests, diseases, increasing weather extremes, and rising production costs. This webinar explores the potential of soil restoration and improvement to reduce these risks, stabilize yields, and build resilience. We will focus on three key soil health issues: cover cropping for plant-available nutrients and moisture, reducing tillage intensity, and frugal use of nutrient-bearing amendments. The webinar will be presented by Mark Schonbeck, and Emily Oakley of Three Springs Farm in Oklahoma will be online to answer questions.

January 13th, 11AM PST
Free and open to the public. Advance registration required.

Mark Schonbeck is a Research Associate at OFRF. He has worked for 31 years as a researcher, consultant, and educator in sustainable and organic agriculture. He has participated in on-farm research into mulching, cover crops, minimum tillage, and nutrient management for organic vegetables. For many years, he has written for the Virginia Association for Biological Farming newsletter and served as their policy liaison to the National Sustainable Agriculture Coalition. He has also participated in research projects to analyze, evaluate, and improve federally funded organic and sustainable agriculture programs. In addition, Mark offers individual consulting in soil test interpretation, soil quality and nutrient management, crop rotation, cover cropping, and weed management.

Emily Oakley co-owns and operates Three Springs Farm, a diversified, certified-organic vegetable farm in eastern Oklahoma. With her partner Mike, she cultivates over forty different crops and more than 150 individual varieties on three acres of land. Their goal is to maintain a two-person operation that demonstrates the economic viability of small-scale farming.

The election is over, but the work starts now 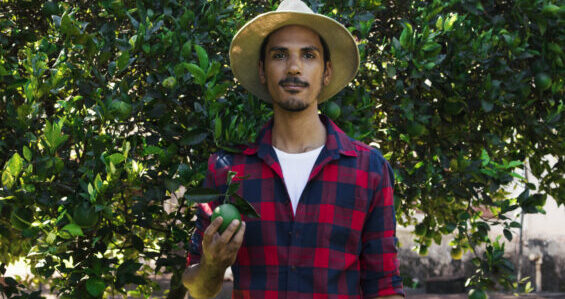 November 17, 2020 – With a new administration moving into the White House, it is more important than ever to make organic voices heard. OFRF has delivered a transition letter to the Biden-Harris Administration with a list of action steps they can take immediately to increase support of organic agriculture at the U.S. Department of Agriculture (USDA). We have developed a set of concrete policy recommendations for Congress and are meeting with USDA to ensure our research recommendations are prioritized.

The election is over, but the work starts now.

Organic agriculture must be part of the climate solution.

Through regenerative organic practices that build soil health, farmers can more easily weather the storms and extreme temperatures that have become our new normal. Together, practices such as cover cropping, crop rotations, and conservation tillage work with nature to build healthy soil and help mitigate climate change by capturing and storing more carbon and reducing greenhouse gas emissions. It is critical for federal policies to support producers adopting these practices and promote the expansion of organic acres.

What we are doing

OFRF has spent the last five months working closely with partner organizations to align on key priorities and strategies, writing public comments and extensive blog posts, strengthening our coalitions, and developing research and policy recommendations in preparation for the first 100 days of the next Administration, future climate bills, and the 2023 Farm Bill.

We are investing more resources into funding on-farm research to foster climate mitigation and adaptation, developing grower education resources to support the adoption of best soil health practices, and advancing our four-part policy platform to ensure that any federal level climate policy includes support for organic farmers and ranchers as critical partners in our climate change mitigation efforts.

OFRF encourages the Administration and legislators to ensure sustainable and organic farmers and ranchers have a seat at the table as climate policy discussions continue to develop. We encourage Congress to use the Agriculture Resilience Act (HR 5861) as a roadmap for comprehensive policy proposals that expand and improve existing USDA programs so agriculture can fulfill its climate mitigating potential and be part of the solution.

What YOU can do 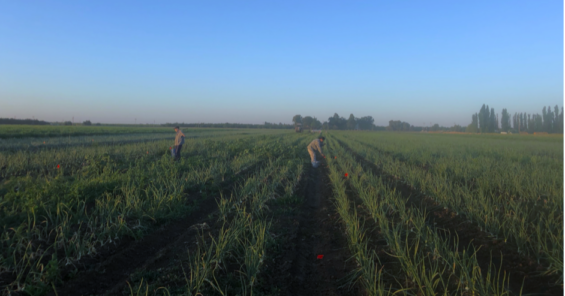 November 10, 2020 – Building healthy soils is the foundation of successful farm management. However, efficiently managing soil fertility remains a challenge for organic farmers. Determining how much organic fertilizer to apply—and when—is a complicated process: too much can pollute the air and water, and too little limits crop productivity. In Yolo County, CA some organic farmers are reducing their reliance on organic fertilizer inputs by implementing diversification practices such as cover cropping, crop rotations, and intercropping to increase soil health and fertility.

These diversification practices add nitrogen to the soil in the form of organic nitrogen, which can then contribute to building soil organic matter. Organic nitrogen sources and soil organic matter must first be broken down by microbes living in the soil for nitrogen to become accessible to plants, in contrast to synthetic fertilizers or certain OMRI fertilizers like guano, which are already mainly available to plants as ammonium or nitrate. At present, it is difficult to quantify the rate at which nitrogen becomes available through the breakdown of organic nitrogen sources and soil organic matter. Most traditional soil tests were developed for conventional systems and measure only the amount of ammonium or nitrate sitting around in soil; they do not capture the dynamic flows of nitrogen released by microbes. As a result, it remains difficult for most organic farmers to determine when and how much nitrogen is available to their crops, especially if they are mainly relying on diversification practices to improve soil health and supply nitrogen.

To address this challenge, OFRF funded a project led by Assistant Professor Tim Bowles and Ansel Klein at the University of California, Berkeley to quantify the flow of nitrogen from soil organic matter to plants on working organic farms. The project team combined experiential knowledge of organic farmers with technical measurements of nitrogen flows in their soils to understand how varying levels of diversification affected the availability of nitrogen. In addition to assessing the extent to which organic farmers in this region rely on organic fertilizers, the researchers wanted to investigate how well traditional soil tests reflect the actual flow of nitrogen on diversified farms. They also aimed to facilitate farmer-to-farmer knowledge sharing of diversification practices that promote healthy soils.

Due to a number of unforeseen challenges associated with the COVID pandemic and wildfires in California, the research team is still in the process of analyzing the nitrogen flow data. The researchers completed preliminary analyses that confirm their methodology works and they plan to use this approach to describe how diversification practices may be linked to how nitrogen moves through organic farms.

So far, the researchers were able to measure plant-available nitrogen directly and preliminary results indicate that some organic farms have low levels of plant-available nitrogen, despite having high levels of crop diversity. One explanation could be that much of the nitrogen in the system is tied up in soil organic matter and therefore is not detectable by traditional soil testing approaches. As the researchers continue to complete nitrogen flow lab analyses, they hope to shed more light on this finding.

In addition to lab research, Bowles & Klein also collaborated with organic farmers to create a farmer spotlight series where growers shared their insights into how to successfully implement cover crops and the importance of soil microbes for soil health. They are also finishing two podcasts in collaboration with The Farmers Beet, an agricultural podcast hosted by the Community Alliance for Family Farmers. Once data analysis is complete, production will begin on a short, informational video highlighting the outcomes of this project.

Results from the final report can be accessed here.

October 20, 2020 – Most modern crop cultivars have been bred and selected to perform well in conventional farming systems over wide geographic ranges. As a result, organic farmers have relatively few options for purchasing regionally adapted cultivars suited to organic production. When OFRF conducted a national survey of organic producers for their 2016 National Organic Research Agenda, respondents commonly stated the need for increased on-farm plant breeding and variety improvement for organic seeds. In response, OFRF has awarded four new grants to support researcher/farmer collaborations in the areas of crop breeding and organic seed development.

The first grant to Sarah Hargreaves at the Ecological Farmers Association of Ontario supports three breeding projects focused on providing best practices for adapting to climate change with vegetable varieties that are locally adapted to low-input organic systems for southern Ontario and the Northeast U.S. By supporting farmer-led breeding efforts for organic production, this project contributes to an emerging but critically under-researched area of vegetable farming. Ultimately, the research team hopes to release three varieties of early ripening, blocky, and flavorful bell peppers: a mass-selected population of red peppers, and uniform populations of red and yellow peppers using progeny lines. They also aim to breed an open pollinated broccoli variety that is heat tolerant and adapted to organic systems, as well as an open pollinated seedless English cucumber with excellent flavor and good yield that is adapted to organic greenhouse conditions.

The second grant to Helen Jensen at Seed Change supports the evaluation of selection methods and efficacy in on-farm breeding of organic wheat and oat varieties. Participatory plant breeding (PPB) is internationally recognized as a methodology that works collaboratively with organic farmers to minimize environmental impacts and adapt to climate change. This project will document how farmer-selectors have contributed to genetic improvement for organic production of wheat and oats and share that information with existing and prospective PPB participants across the country. The researchers hope to improve knowledge of selection practices for all of the stakeholders in the program, as well as improve methodologies and increased adoption of PPB by a broader range of organic farmers.

The third grant was awarded to Carol Deppe at Fertile Valley Seeds to breed disease-resistant heirloom-quality tomatoes, especially those resistant to late blight and a number of other diseases. The project aims to enable the wide distribution of seeds that allow organic farmers and gardeners to easily develop their own heirloom-quality tomato varieties with resistance to common diseases.

The fourth grant to Lee-Ann Hill at Rocky Mountain Seed Alliance will look beyond the marketability of heritage grains to explore their impact on soil health, climate adaptivity, weed pressure, and insect pressure through farmer-driven, participatory research. Research data collected from this project will be published in the Heritage Grain Trials Handbook, freely distributed online, and disseminated to grain trialists and interested growers to increase and enhance knowledge about these unique varieties. With this project, the research team expects to increase the availability of 20 unique heritage grain seed varieties.

These grants are four of 13 OFRF is awarding this year to help address the top challenges facing organic farmers and ranchers. As a result of OFRF’s research, education, and outreach efforts, thousands of farmers have received pertinent research and training information. Results from all OFRF-funded projects are available to access for free in our online database. 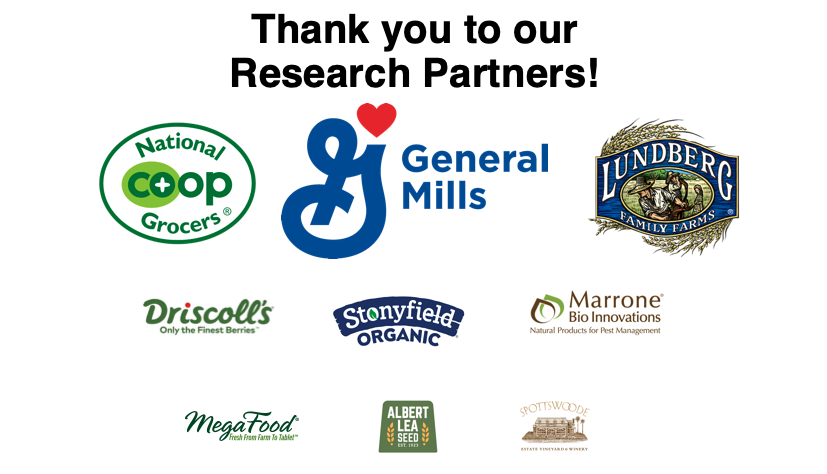